skip to main | skip to sidebar

"The Paupers and the Poor Farms: Support and Care for the Poor in Readfield, Maine 1791-2018 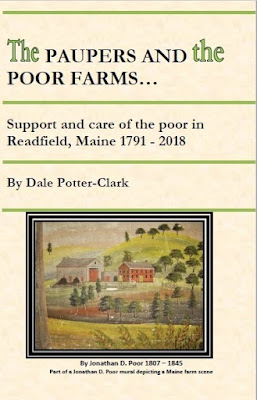 When people fell on hard times in Colonial New England they stood a good chance of being run out of town or auctioned off as indentured servants to the lowest bidders. In these pages you will learn about such situations - some may have occurred in your own backyard. Included are stories and recollections about the lives of some paupers. Photos show a few of the houses where paupers stayed before the first poor farm was established, and several are of benevolent people who reached out to help them. 19th century maps will help readers find where some of those homes the poor farms were located and, for readers who enjoy stats, some of those are provided too. Not to be forgotten are the Overseers of Poor and the managers who oversaw the three poor farms that once existed in town. There is an added bonus of newly discovered 1900 vintage photos of East Readfield village, known as “the vanished village”.


Order via PayPal (see button on the right) or email the author directly.


BOOK REVIEWS:
Stephen Scharoun, Masters degree in American and New England Studies, historical archaeologist ~
This book represents one of the few comprehensive accounts of the history of a town poor farm.  It is an important contribution to the history of the Town of Readfield and in a broader sense reflects changes in the law and local attitudes towards the care of the poor that apply to every town in Maine. Dale’s work has inspired me to continue researching the history of poor farms in Farmington and the Sandy River Valley.

ROBERT MOHLAR, M.D., READFIELD CONSERVATION COMMISSION ~
How the people of a small Maine community have striven to meet the needs of the less fortunate among us over the last two centuries is engagingly distilled by Dale from various records, deeds, letters and personal recollections.  Some of the stories are told with a light and humorous touch which I enjoyed, especially those about the wandering "tramps" during the Great Depression years.  This book caused me to reflect on the myriad of efforts in place to meet these needs in our current world.

HOWARD LAKE, ESQ, BOARD OF DIRECTORS, KENNEBEC LAND TRUST ~
The Readfield Town Forest, now growing trees and hosting trail walkers, has a fascinating history as a Town Poor Farm. Dale has opened the door to an interesting period of life in our community. Histories are often about the winners and the famous but there are others who lived and died whose stories should be told. It is also interesting to see that although the cost of welfare is not an issue of recent vintage, we have come far since the days of putting the poor out to the lowest bidder!
Posted by Dale Potter-Clark at 7:27 AM

Brief Biographies c.1900 Pertaining to some residents of Readfield, ME indexed with illustrations

The Paupers and the Poor Farms: Support and care of the poor in Readfield, Maine 1791-2018

ADDITIONAL BOOKS AND MONOGRAPHS BY POTTER-CLARK

Make checks payable to:
Dale Potter-Clark
Mail to:
959 Cross Hill Road
Vassalboro, ME 04989
For further information email crossings4u@gmail.com
Though we will process your order asap it will be mailed media rate so please consider this as you await delivery.

Check out these links to other Readfield related historical web sites