skip to main | skip to sidebar

A Tribute: TO THOSE WHO LED THE WAY... by Dale Marie Potter Clark 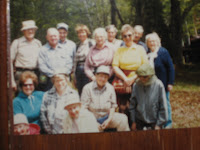 This book has been under development for over thirty-five years. It all began around 1976 when, on the cusp of our Nation’s Bicentennial, the Readfield town fathers asked if anyone would be willing to review and organize the Readfield vital records that had been stored in the town vault since 1791. Those records were a treasure trove that few small Maine communities still had at their fingertips.

Fortunately we had some very interested and dedicated residents who were up to the task: Marjorie and Charlie Elvin, Mary Townsend Hock, Camilla Coffin Pinkham, Catherine Hoch, Ruth Townsend, Ralph Nichols, Evelyn Potter and Marion Townsend to mention some key players. Their sorting and organizing created a spark of interest that went far beyond Readfield Town Hall. They began to visit old cemeteries in Readfield and surrounding towns – many that had fallen from people’s recent memory or care. They rubbed ancient gravestones and recorded the names and dates that appeared. They generated enough interest in town so that eventually some of those old graveyards were restored.

They formed a “Walk Group” and every week, during the spring and fall, they tromped through woods and pastures to retrace the steps of our forefathers. They used old county maps to identify discontinued roads and then set off to find the foundations of old homesteads. Sometimes there were stories from current or past neighbors or family members to embellish the day. They learned that where there are stone walls, three old Maple or Oak trees planted in a row, or Day Lilies blooming in the middle of woodland, that more than likely there once stood a farmhouse. They cautiously walked the area – always on the lookout for uncovered old wells or barbed wire. They looked for any clues of life “way back when” – and were thrilled at the end of the day to share their findings with anyone who had interest – especially someone younger, who would carry on after their days were over. I was so very fortunate to have been the “young one” who, at the time was barely 30 years old. In spite of my age I had lots of interest in local history and happily joined them on many of their adventures.

The “Walk Group” also visited historical homes in the area to learn more about the early families who had lived there, the house’s architecture, Moses Eaton stencils, Rufus Porter murals and more. They explored former sites of cattle pounds, mills, one room schoolhouses, tanneries, churches and factories to mention a few. Their efforts also initiated interest in interviewing old-timers and town fathers such as Luther Russell, Bill Brown, Tink Rolfe, members of the Fogg and Lane families and others. As a result we have recorded and documented several oral histories.

Some of this group also made weekly treks into the Maine State Archives in Augusta, where they spent the better part of those days transcribing Readfield deaths, marriages and births from the original vital records. Marjorie Elvin, who was a retired school teacher with striking attention to detail, organized all that information into one document – LONG before the benefits of computers. During this process she also combined those vital statistics with the vast collection of town and familial information the “Walk Group” had amassed. The result was TWO card files – one for the Readfield Town Office and another for the Readfield Historical Society. These have been, and continue to be, an outstanding source of information for many, many family researchers from all over the world.

Soon after Marjorie Elvin died her husband Charlie honored me beyond measure. He appeared on my doorstep one day with a bundle of papers in hand. “This is Marjorie’s work Dale,” he said, “and with your interest in history I know you will see that it gets carried on.” So here it is Marjorie with my heartfelt thanks for your dedication and vision. And to the others who welcomed this youngster (now oldster) into their circle I thank you too. I learned so much from all of you, for which I am eternally grateful. Your work lives on…

Brief Biographies c.1900 Pertaining to some residents of Readfield, ME indexed with illustrations

The Paupers and the Poor Farms: Support and care of the poor in Readfield, Maine 1791-2018

ADDITIONAL BOOKS AND MONOGRAPHS BY POTTER-CLARK

Make checks payable to:
Dale Potter-Clark
Mail to:
959 Cross Hill Road
Vassalboro, ME 04989
For further information email crossings4u@gmail.com
Though we will process your order asap it will be mailed media rate so please consider this as you await delivery.

Check out these links to other Readfield related historical web sites